William wrote: “I am in high school, just finishing my freshman year. l am attending a very prestigious, all boys school. I am very bad at talking to girls in general. I am in ‘The Freshman Drama’ (a parody of Law and Order) and there is this girl I sort of like but I can’t talk to her that much, and when I see attractive girls on the train I can’t talk to them. I was in love once but I was stabbed in the back, it took me 7 years to tell her that I liked her. Can you please tell me how to talk to girls in general, because I want to talk to them. All of my friends are really adept at talking to girls, and I am bad at this.”

Liz says: This is why I’m not a fan of schools segregating the sexes. A coed educational environment allows the sexes to interact and observe each other in varying social situations. You learn that the other sex isn’t this mysterious creature; you see each other as being more alike than different.

So the first thing to know is that you have more in common with girls than you probably realize. It’s these commonalities that you should look for and focus on. Use anything that you can relate to as a spring board for conversation. That girl you “sort of like” from the play you’re both performing in–use the play, your love for acting, and whatever else related to that commonality to start talking to her!

It’s understandable that your heartbreak has made you less confident about talking to girls you’re interested in. But you have to take that experience as a learning lesson and grow from there. It’s called emotional resilience: knowing you are strong enough to evolve and work through emotional pain. Focus on the things you like about yourself, and eventually a painful memory will be a thing of the past.

Here’s another tip: remember to keep everything in balance, like compliments. If you focus too much on her looks, by repeatedly complimenting her at first, it can come off as either desperation or creepiness. Telling her one time that she has “beautiful eyes” is great, but then also telling her that she’s “gorgeous” and then “so pretty I can’t take my eyes off you” and so forth is TOO much.

And stay away from cheesy pick-up lines. They’re only funny on a meme. In real life, they’re just lame. It’s always more attractive for a guy to be himself instead of trying too hard to be funny or charming.

Last, but not least, don’t make the mistake a lot of other guys make by asking her personal questions without even introducing yourself first. Guys who approached me by asking “What’s your name?” or “How old are you?” were such a turn-off to me. It’s so rude to not begin by introducing yourself. You will get further if you start with “Hi, I’m William” and she will likely tell you her name in response 😉 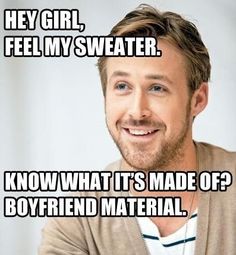